Hitch-hiking, far away and in a hurry. Or a account on how I got from Spain to Senegal - First Part

This is a chronological account on how I travelled hitch-hiking (or auto-stop) in September 2013 from Toledo in Spain up to Saint Louis in Senegal; and my adventures with the rivers, the borders and the visas. Since it is pretty long, I will do it in several separate articles. If you are looking for a story, I hope you enjoy it; if you are looking for advices, you can look for them through the text or wait until the last part where I will summarize everything I learnt.

Introduction:
Saint Louis is the first stop I thought of doing in Senegal; and from Toledo there are more than 3600 kilometres (more than 2200 miles), and I wanted to hitch hike them in less than a week. By car and according to the Internet it takes about 43 hours non stop. It is also worth taking into consideration that I was going to do it through countries were hitching doesn't work at its best. In Spain it works but it's slow, and it is considered by those in the know as one of the worst countries in Europe to travel this way. In Morocco people tends to expect, and assume even, that you will pay them; and when you tell then you don't want to or can't pay, several will keep on travelling leaving you where you were. Of Mauritania I didn't know much, just hear say or through the internet, and it didn't look better than its neighbour in the north. And from Senegal I knew nothing at all, but my idea was that is was going to be similar to the previous ones. 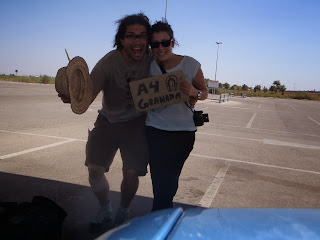 1st day in Spain, slower than expected:
Getting out of Toledo was the easiest, and I was at ease ever since my friend Cris told me that the same Tuesday that I was planning on leaving, she was going to her home town and could drive me over there, which gave me an excellent start. We travelled forsomething like an hour, talking about life and slowly saying goodbye. I was starting with luck on my side, and this gave me the illusion that it would stay that way. And just after Cris left me my luck changed, and although from the supermarket where we said goodbye I was picked pretty quickly, this man left me a few kilometers away in the exit of another town where I was 1 hour in the freeway trying to get a lift to Manzanares, where the road going south crosse, or anywhere else! But this strip of the road in the hour I was there is not very used, which only helped lenthen the time of my wait.

At the end a guy stopped in a van and left me in a good spot, already having take me all the way of the stretch of road up to the route A4 to Andalucía; and then my luck improved a little again when the first truck driver I asked told me he could drive me with no problems, but he ought to wait his mandatory half hour break. And since he was going to Córdoba and I wanted to go to Granada, he suggested to drop me off in a big Service area where many trucks stop and was my best option in his opinion.

In this Area, the Guarroman, I was more than an hour asking without any luck to every driver that crossed my path; and I was standing in the only entrance to the cashier, so everyone went through me. I can't really blame it all on the unwillingness of people, because although everyone I asked refused to take me, there weren't that many that stopped at that station, and it's also worth noting that most of them were heading north. At the end I decided to cross over to the other side of the freeway, because this Service Area is in the side of the lane heading north, and on the other side there is another service station, and I was going to be able to get the ones stopping to refuel there and also those heading south in my same direction. And ANOTHER HOUR later I was picked by a sales man on his way back home, who took the trouble of going some kilometres out of his way to drop me off in a station with a restaurant which he considered as an excellent place to ask for a ride south. 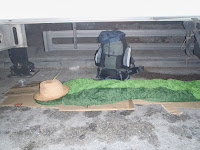 This service station; casually named The Oasis, was where I ended up spending the night. Because although I didn't actually get there late, about 19:15, it did get dark quite fast; and having asked a few cars and trucks, I made friends with two truckers that invited me to dinner and some stories, and one of them invited me to sleep under his truck, so I would be covered and a little guarded. He wasn't leaving until 10 in the morning so I was under no danger of him running me over when driving off. :-)

2nd day in Spain, the arrivel to the Mediterranean: 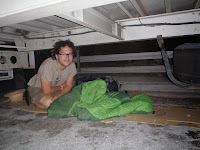 The next morning, thanks to the noise of the trucks that had spent the night, I woke up early, but apparently not early enough and most of the trucks had already left. So I mounted guard in the entrance to the Café and asked everyone who went passed me. Almost an hour and a half later I found the charitable soul that both was going in my direction and was happy to take me along. He was going to Granada and recommended me not getting in the city centre because afterwards it was going to be very hard to get out of the urban area, so unfortunately the trip wasn't so long. I asked him to leave me in where he thought it was best for me even though I normally find this thing of asking drivers for advices hasn't given me good results, but sometimes I don't have an alternative.

In the station where he dropped me off I wasn't long, and about twenty minutes later I was invited on board the car of a man from Ceuta that had seen me ask in vain a couple of times and felt sympathy for me. With him I drove up to Fuengirola, a town passing Málaga, in a super comfortable ride where he even invited me breakfast. For a place to drop me off he gave me to choose between under a bridge and a service station, and I inclined myself towards the second option. I quickly realized that my decision hadn't been very good, because that was a very neighbourly service station that was not going to give me any result, so I got out of it and placed myself in the roundabout's exit towards the freeway. Being a toll-free freeway and in the middle of a residential area with many small towns, what I got the most was that sign with the hand with which they say: "I am staying right here". Agh! Luckily I didn't wait for a thousand years and I got a lift from a guy who got me to somewhat better located roundabout. From there a Russian guy in a Lithuanian car took me to the supermarket where he did his shopping, that turned up to be such a bad spot that I walked 20 minutes up to a service station a little bit firther ahead, that was also a crappy place.

I begged many drivers to take me out of the middle of the town, and I made one of them feel sorry enough so as to change his plans from shopping and to go straight to his home, giving that way a 5km ride. I was almost instantly picked up by a young couple that understood about hitching, and left me in a nice roundabout with a good flow of cars. Up to the detour towards Gibraltar I got a ride with an English couple that lived in the British city. And I found myself in San Roque, a place I had been before in the previous time I went ot Algeciras. This time I was armed with a good sign with my destination written loud and clear, and thanks to it I got picked up by a dude that took me to the end of the road, who told me that he always saw people there with a "Málaga" sign... which is on the other direction!

I made it to Algeciras, the great frontier between Europe and Africa. The story of how the trip continued up to Senegal I leave for the next piece.

Leave your comments if you feel like it, and don't hesitate to ask if you are thinking of doing anything like it!

Regards from Mama Africa,
Martin
See you around the world!
Posted by Loberto at 1:20 PM