In a Motorbike through the Patagonian coastline! Uniting Ushuaia and Viedma!

That's crazy! How brave! That's insane!
All those are valid things to say of someone who decides to do over 2000 kilometers at a maximum speed of 60 km/h (around 40m/h) and with compulsory stop every 150 km approximately (100 miles) to lead gas... in a road that sometimes for more than 400 km you cannot find a pump!!!


Well, I did not have all that information when on February the 19th I decided to leave Uhsuaia riding Julieta (that's the name of the bike!). And in my first 3 days I lived all the hard things I could live in the bike:
- Day 1: I mounted the bike poorly dressed, and half an hour in the road I couldn't stand the cold. I stopped to take a picture, and I could barely keep the camera steady. Another hour later I stopped at Tolhuin to get a hot bite... and after that I did two hours with no stop to get to Rio Grande and being able to warm up!


- Day 2: with wind of 45km/h (30m/h) and gusts of over 60km/h (40m/h) I hit the road. I did not think that through. Luckily I had the intelligence of not going to much in a hurry, and I stopped half way across the island somewhere I could find shelter.

And after that I equipped myself a little it better, and what was left for me to learn is to drive a motorbike on the route. You hand falling asleep, your ass hurting, the wind blowing the bike to hell, etc. Being so far south, I could only face the windiest region in Argentina!

Firstly I went from Punta Arenas to Puerto Natales, in the brotherly Chilean nation, and I walked a few days as I wrote about in the previous entry. I got there alone and ill equipped, and I left well equipped and with a new family!


After that excursion, I set myself the goal of climbing north the Route 3 by the Atlantic coast of Patagonia. The mountain part in the Argentinean side I already visit it several years ago, and since then I have wanted to see the coast. So I set off going to Rio Gallegos, the first city of my periplus. I met Clara, a fantastic girl who hosted me, and with Comando, from the biker group Depredadores del Camino, who hosted Julieta. 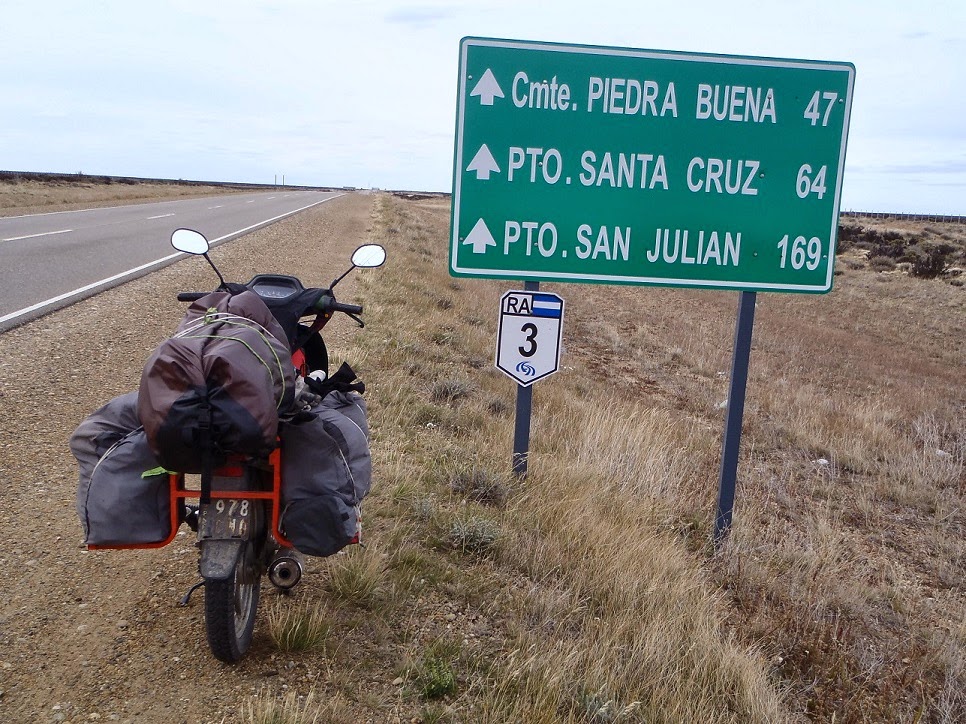 From Punta Arenas I was much better equipped, I had bought a set of technical pants and jacket, from Helly Hansen, that gave the protection from wind and water I was lacking. I even bought a waterproof bag that cost me few bucks, but which gave lots of extra space. And using all the cloth I could find, and that fitted me at the same time, I managed to fight the cold of the wind. Only the feet were missing, that for the time being the managed as they could with double socks and a lot of enduring.

My next stop was Comandante Luis Piedrabuena, a small town where I switched mi plan of laying by the river to relax, for eating, drinking with Isabel and her friends, and practicing my skills in the sewing machine improving my saddlebags. (Regarding how I am loading my bike, and the modifications I did for the road, you'll be able to read better in a article that has not been written yet#)


In my path the were two cities that I had thought about visiting for a long time: Puerto San Julian and Puerto Deseado. When I looked the wind forecast I figured that if I did the 100 kilometers (65 miles) to go into Deseado, I was going to get stuck because of the wind for almost a week. So I took the decision to skip this city and go directly to Caleta Olivia from San Julian, which made me riding the longest path till that time in one day: 360 km (220 miles), around 9 to 10 hours.

To San Julian, which was only 120km (80 miles) from Piedrabuena and over the Route 3, I was able to go without any problem. And to sleep in this town I hadn't find any CouchSurfer, so I was thinking of looking up a very cheap Hotel; the camping, which is very cheap, I didn't want to go because for the long day I had ahead of me I had to leave early and putting the camp away takes a lot of time. But luckily Bea had told me about a cyclist who had slept in the Town Gym... so with by greatest charm I went to ask if I could stay there to sleep on night. And thanks to the request of el Cabezón, the janitor on duty, I was given lodging for that night.


A separate paragraph deserves the stop I made in Fitz Roy (far away from El Chalten) in were I met Martin and another friend of his that had gone for a stroll in their bikes from Caleta, with whom I started a small chat. In said chat came out the subject of my ill advised snickers, and Martin decided to give me as a gift his security shoes! With 3 pairs of thermal socks! Great guy.


In Caleta I was treated as a god by Maxi and Eze, who hosted me as an "all inclusive" guest in their home. Watching movies and eating for two days, no touristing around. And since I had been invited by Beni to her place in Rada Tilly, I went for one night there which ended up giving me a night of sharing  with the sailors of Comodoro. I started thinking of going back sailing. The greatest part of this part of the road is that, as I had been told by the Tourist Information guy in Caleta, the kilometers between Caleta and Comodoro Rivadavia are the only ones IN THE WHOLE RUTA 3 that are by the coast of the Sea... Very cool! 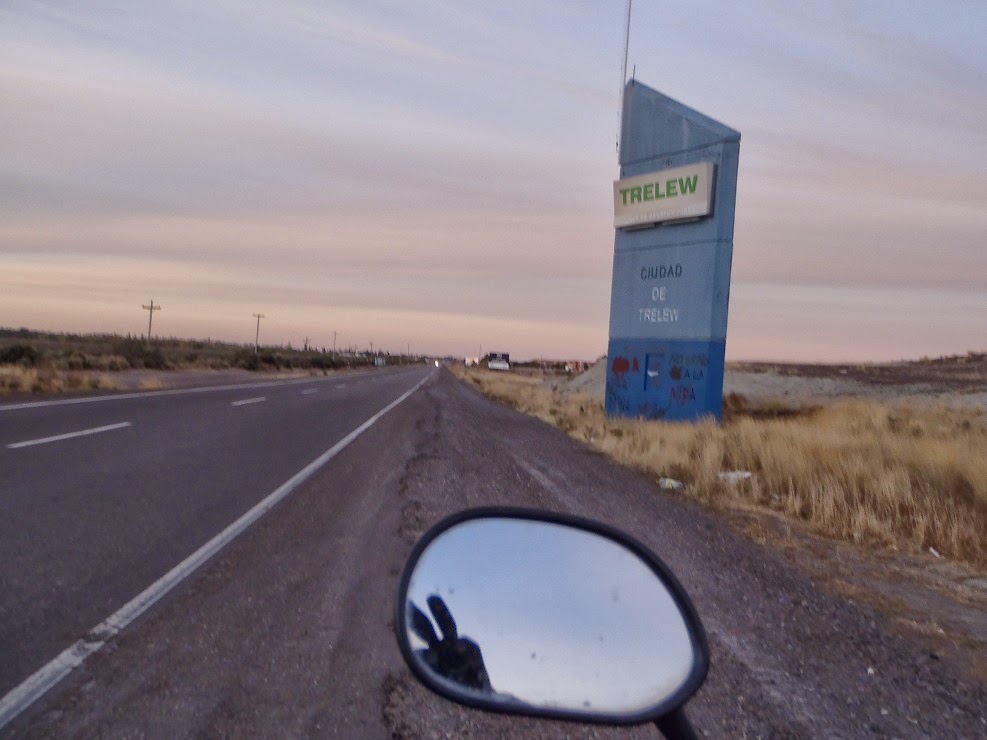 Already very close, my next big destination was the Peninsula de Valdes, where I was going to sleep in Puerto Piramides at Paula's, a friend who I had met in my days in Ushuaia. But before arriving I needed an intermediate stop, so I stopped in Trelew a shared some days with Kico and Pryda, with whom I shared a delicious meat pie and a stroll in the "welsh" town of Gaiman. 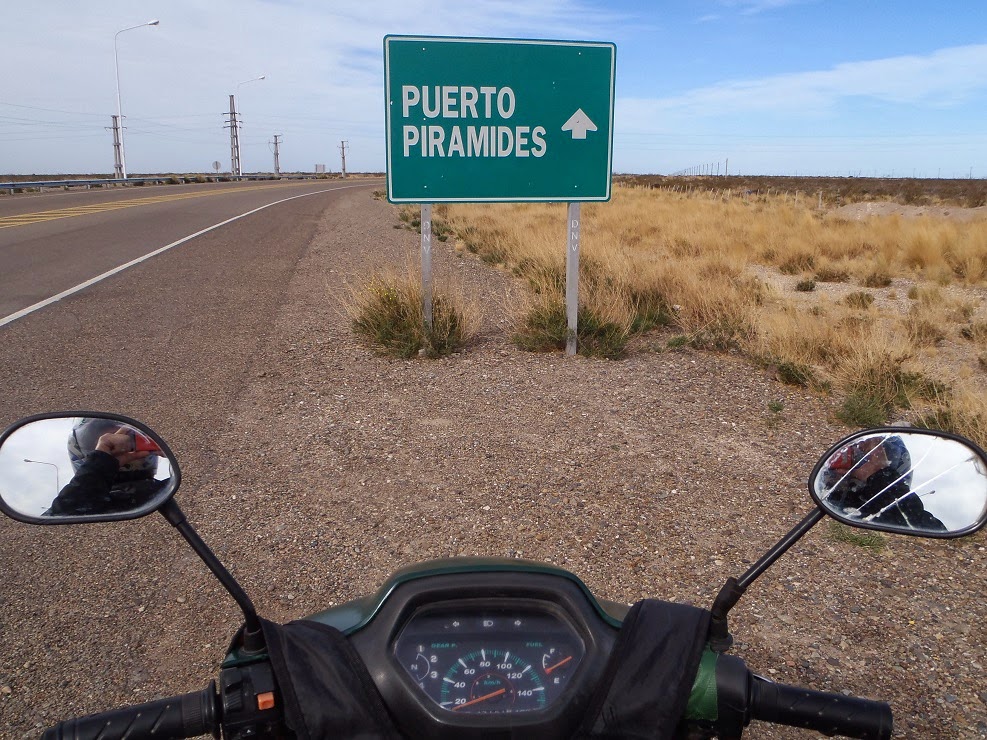 And I arrived at Puerto Piramides and the long awaited Peninsula. I had been told it was Orca season, but I missed them. What I did enjoyed was going around half the peninsula, walking around the beach and seeing a spectacular sunset, and of course the reunion with Paula, a friend I met in Ushuaia, and her boyfriend Gaston and cousin Damian.

I got to go to the beach! Thanks to the recommendation of Bea in Piedrabuena, first I visited the Playas Doradas, a small seaside town next to Sierra Grande with no one around. Almost literally, because on top of the town being almost empty, I got away from the town a couple kilometers to set up the tent on the sand and spend a day of complete solitude... that I luckily didn't manage to fulfill when I met a lady that was going "octopusing" and accepted showing me how it is done...and later gifted me a jar of pickled octopus!!!

I also visited Las Grutas, almost compulsory, and although I did enjoy the beauty of its beaches and I ate a long looked for seafood casserole (looked for since Puerto Natales!), I couldn't enjoy the supposedly warmest waters of Argentine because the weather didn't come through and the wind was blowing a cold breeze.

And so, little by little, I got to the city of Viedma. First city in the Patagonia (twinned with Carmen de Patagones, and which for a long time was the same city). I already got a night's rest in Ana's house, with her parents Marco and Andrea, and I had a great stroll through this two city with another CS girl who was visiting, Marcela. I put here the recommendation of going to the museum in Patagones, because it's really worthwhile to listen the history in what for many years was the entry door to the land of the Patagones. 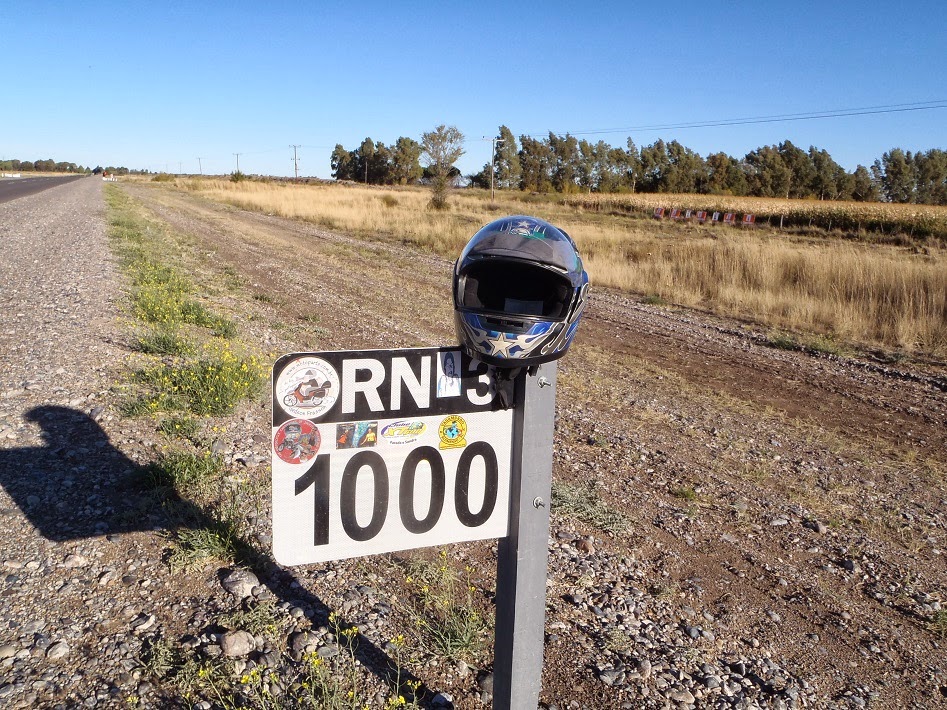 I still have on night ahead of me before getting in the province of Buenos Aires, and a few days before coming back to visit the Capital city. Very far away can I see the end of this periplus in motorbike, so not get anxious that more stories are still to come.


Thanks for reading!
Don't forget to be Happy! 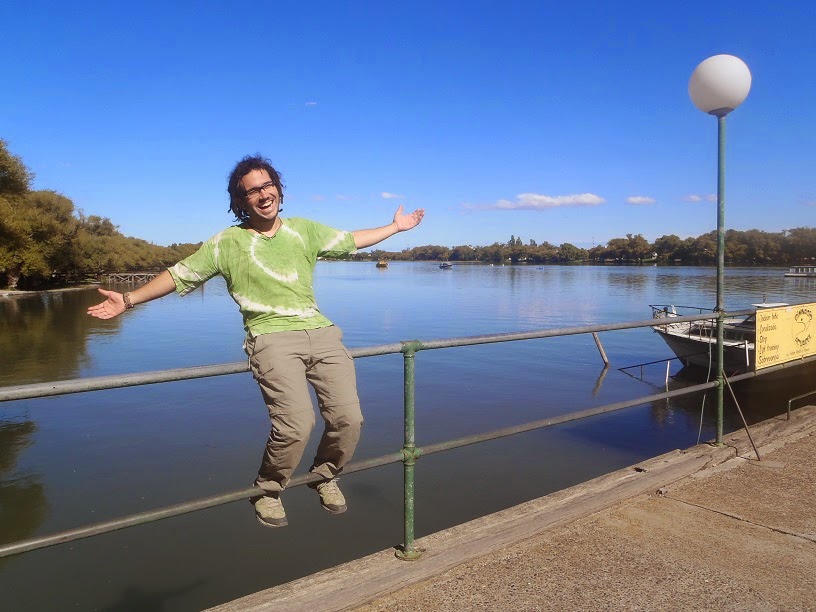 Big hugs from the Land of the Winds,
Martin


P.S.: one last picture, to explain to those who know the bike how I manage to fill the gas without disassembling the hold luggage holder!