When after 30 months travelling I decided to go back to Argentina, one of the thing that motivated me was that I had left my belongings in the house of friends in Ushuaia. I hadn't left with everything well planned, and I did not know how long I would travel, so I didn't go through much trouble "I am leaving this to you, I'll be back for it in a few months" is all I said... and when I got to my last home, I also met my motorbike which I had deposited at Facu's: a Beta BS 110 of the year 2005 that I had bought from my brother a few years before moving out of Buenos Aires.

When I got to Ushuaia, I went to see the bike. Having found beforehand how to reanimate a bike stopped for two years, I was going with the idea of finding out if she wanted to come back to life. I pictured it like the creation of doctor Frankenstein: I was going to give her the shock, and I would see if it worked or not. I took a liter of new oil, which I changed, I tried to start it. I kicked but it didn't start. So I thought of looking into the gas tank. I had forgotten the petrol, so I asked a little bit borrowed from the owners of the house and I kicked again. 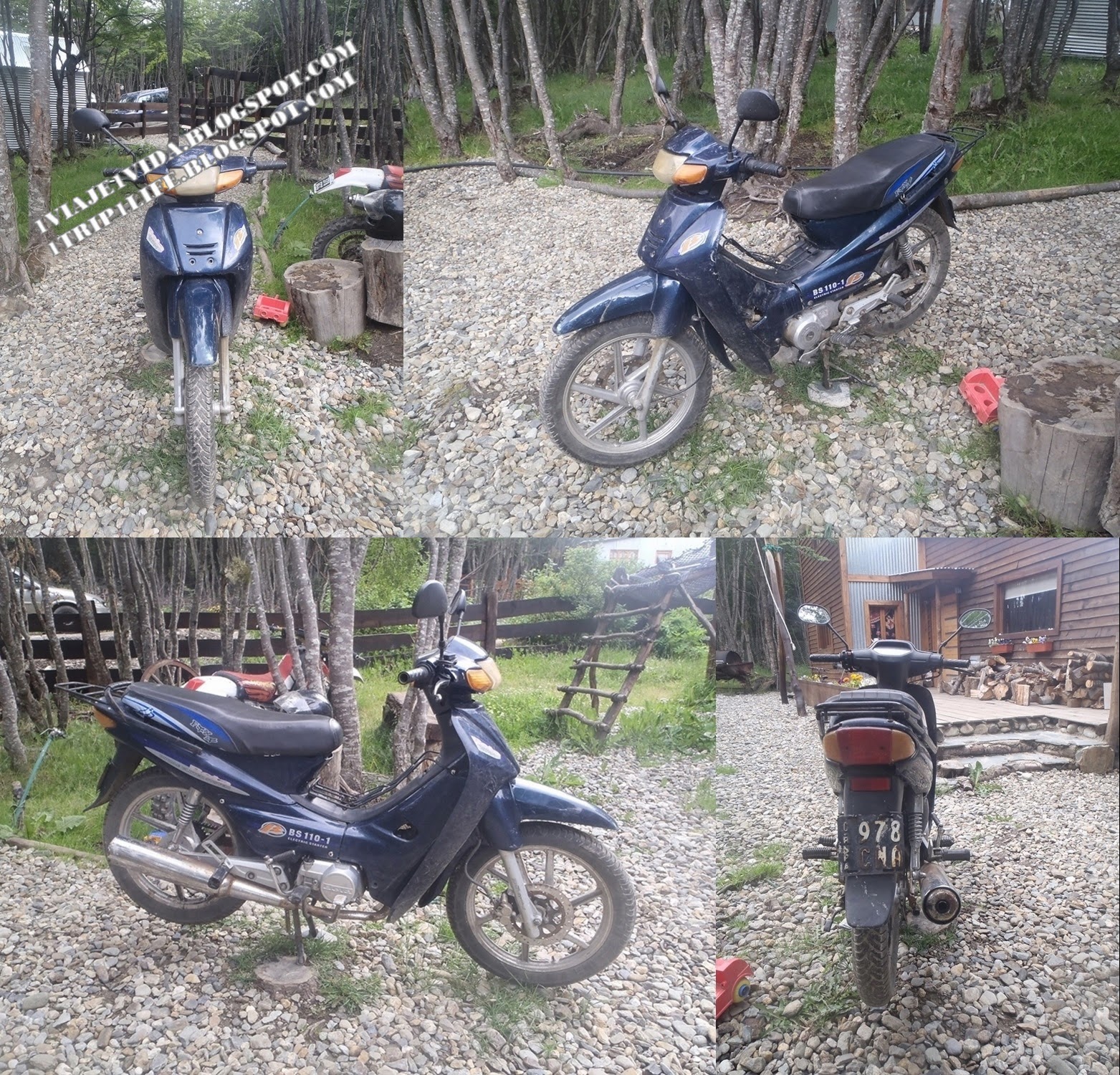 It started! IT'S ALIVE!!!! I yelled with the utmost joy. And I think it was in that instant that I decided it: I was going to go riding a motorbike from Ushuaia to Buenos Aires. A loyal companion such as her, who even with those year abandoned responds to my first carress, cannot be left behind.


But one thing doesn't mean the other, and the fact that she started didn't mean she was ready to go on the open road. At simple sight the where two problem to overcome:

I face the problem number 2 first. O started researching the Internet, asking friends, scratching my nugget thinking ideas, and finnaly I decided to build my own luggage rack. It wasn't any good to adapt the usual trunk, the most common in bikes, because I am at heart a backpacker, and a bacpacker travel with his backpack. And the pack doesn't fit in a little motorbike trunk. With all that, the rack I was going to have to build it from scratch.

While I was planning the luggage rack, I notice that the seat wasn't going to be able to open, and it is neccesary to open it to access the gas tank. So, besides a jerrycan in case I couldn't find gas stations in my road, I need a "quick access" to the tank. And researching a lot on the Internet, I didn't find any solutions. So again I had to turn to my wits to solving out my life.

And if that wasn't enough, looking at my bike I noticed it was a little gloomy, I that she could do with a face wash. So I dicided, amongs all the other things, to pain here a little.

¡And so I started working!

This was relatively easy. I chose to do it with spray paint, because of its easiness. And today I would recommend doing it with more time and better paint. Even if spraying is faster and easier (and if you do it in the wood it doens't even stain!), the paint rubs off on everything it touches for a long time.

The hard part that got me problem, where the back panels. For a moment I thought I wouldn't be able to put them back on, so if you are thinking of taking them out I recommend paying A LOT of attention on how the come out and how they should be put back in place. And also the one in the front wheel, for which it's necessary to take out the wheel to be able to take it off and paint it comfortably.

Seeing the impossibility of accessing the gas tank if the seat is blocked by the luggage, which is the only viable option I could see, I understood I had to look for a way to get to the tank. And as any good engineer, I know that the shortest way between two points is a straight line... And that is what I created: a hole in the seat to be able to access the gas tank with no need to raise the seat; and with no need to do modifications to the gas tank of the gas take to the engine.

With the help of complex tool, I faced the job in hand. And since it is a complex job difficult to explain in words, I will let the pictures to speak by themselves:

I was already fully aware of the reality that I was going to have to do it all myself, for better or for worse, therefore I was going around with an avid eye for materials! I found an old table that Juanchi gave to me, from which I got the metallic structure; from the Internet I got the idea that the rack would stand on the seat, so it doubled as a shock absorber; I measured the bike and draw posible desings; I talked to Facu so he would help me with the welding and tailoring of the structure; and a good day we installed it: 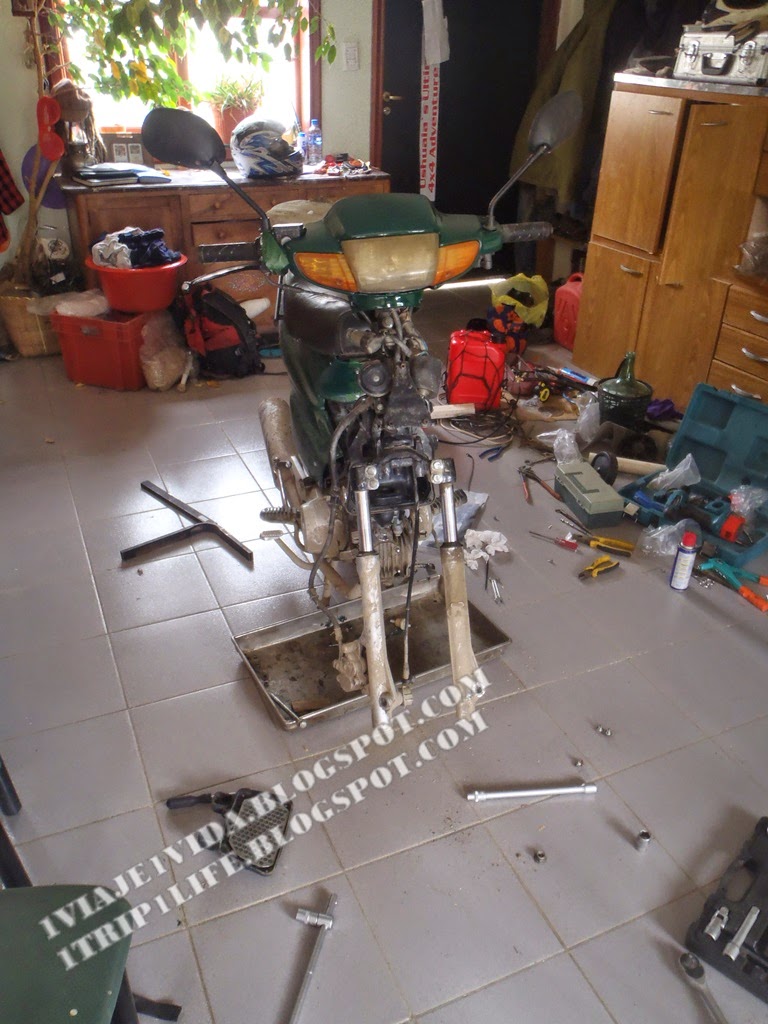 And as expected, there were unforeseen things and some other fixing. For one, I knew I had yo clean the carburetor, air filter and change the gas filters.


And also, one crappy day I got crashed into, and at doing so my front fender exploded. So I turned to sofisticated tools to fix it... 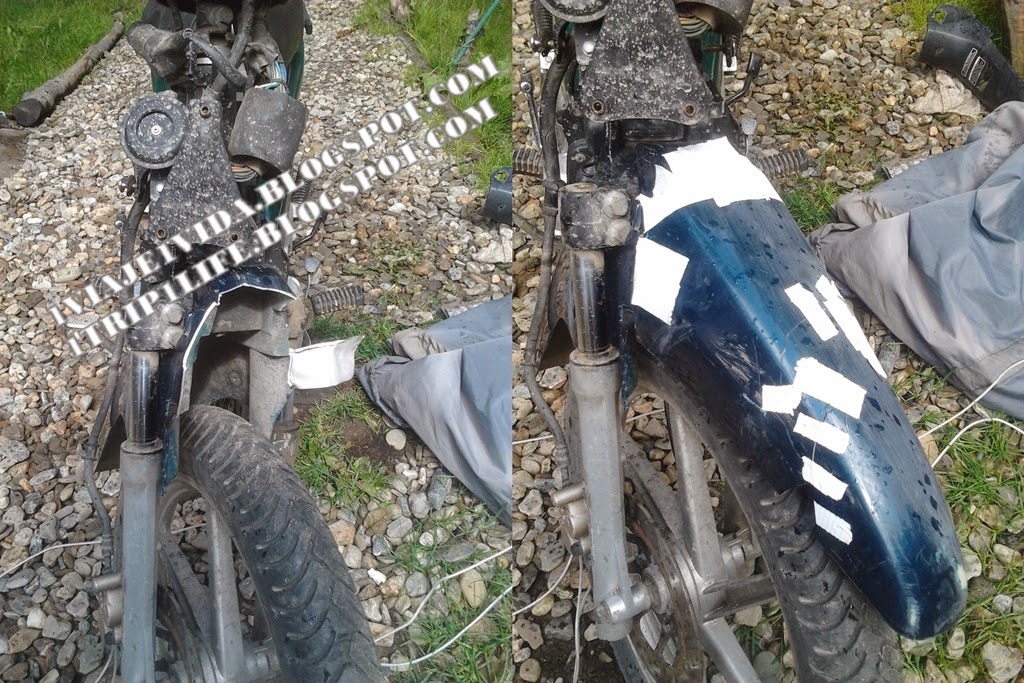 After all that, she was ready. And she was named. From that day on she would be known as... 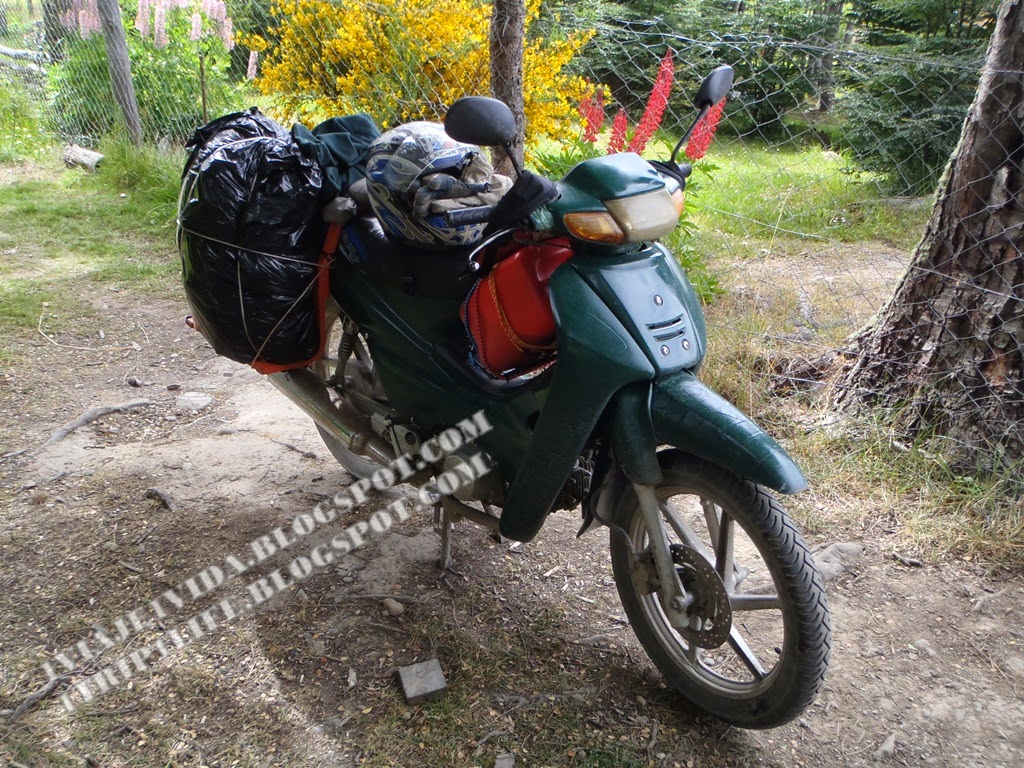 Posted by Loberto at 3:52 PM No comments: