Our trip through Chile's North

Its has been a long time since I wrote here, and many things have come to pass in this trip, si I am going to publish a short tale about our trip in the North of Chile, en in the next weeks I will write with more details about those days.


Our stay in Chile was, from beginning to end, a sample of the solidarity and good vibes that we can find on the road. Starting with Fito in Atacama, who let us stay in his house for a week while he was away (in a trip in Santiago or sleeping in another house). Afterwards in Calama with Reinaldo, who besides sharing his house with us, took us to Iquique both ways without asking anything in return. From there we spent two nights in two small towns: in one we slept in the patio of the health post and in the other one in a inhabited house of a work camp, both by invitation of the persons in charge of the place.


In San Pedro we relaxed a lot, a did a little bit of tourism. Being in Fito´s, in the middle of an ayllu, which is kinda like an community oasis, and ancient way of organizing of the original inhabitants, was almost magnetic. It was hard for us to go out to do stuff; and when we left, we were impelled to quickly some back. We woke up, had a quiet breakfast, layed down to read in the hammock.  The good lazy life.


Calama ws on our way to Bolivia, but the main reason we went was because we were told it had been voted the ugliest city in Chile, and that is something worthy of seeing. In our opinion, they are very exagerated: it's true it's not the prettiest one, but it is definetly not the ugliest one! There we went for a stroll in the pedestrian road, we were able to do the free tour in the Chuquicamata copper mine, and we even ate an asado with authentic Argentinian meat.


Rei was already planning a getaway to Iquique for the weekend to visit his brother and family, and he offered us a ride even before meeting us. We scrounged the ride back, and went in search of the humidity of the sea that we both know best. We took advantage of the time to but a sleeping bag that Julia needed, and we went to the sea.

To get out of Chile we had decided to go through Ollagüe's Pass, in order to go straight to Uyuni. So, when it was time for us to say goodbye, Rei offered to help us in our coming back on the road by taking us to the near town of Chiu-Chiu. There we found the goodness of Wilson, the nurse in the Sanitary Post, who allowed us to set our tent in the patio. And since it was the town for growing carrots, we delighted ourselves with their famous Carrot Queques (cakes in Chilean). 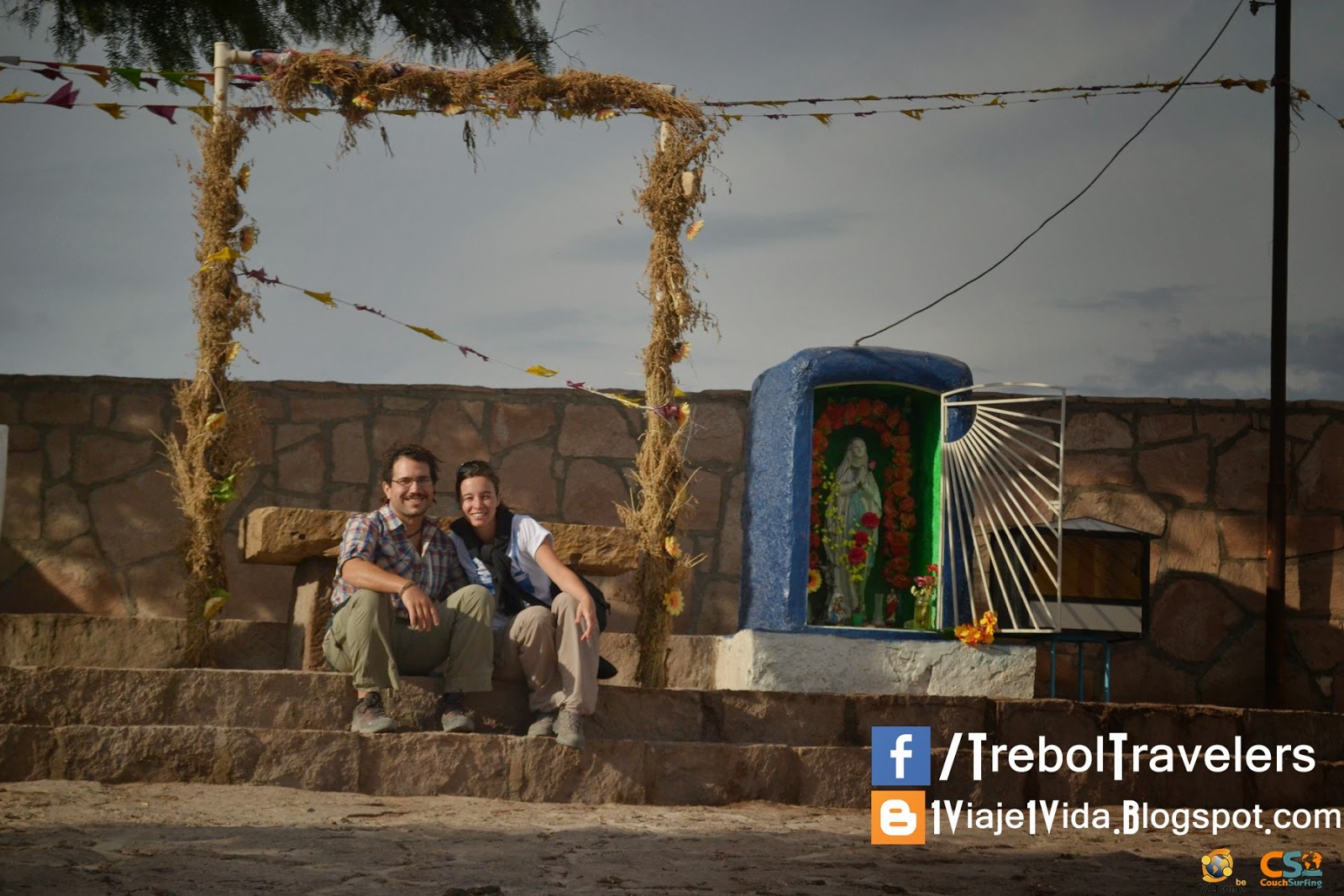 The following day we left at mid-morning to hitchhike in the road, and after 3 hours a pick-up truck stopped that in stead to picking us up, he dropped the competition: Clara and Sebas, who would end up being our partners in the trip and our friends from the road. With them we spent another 3 hours asking for rides until a tip truck offered to move us to Lasana, a town 10 kilometres away, to see if our luck improved. And after spending 2 more hours, we decided to call it a day. Again we saw the Chilean kindness when Arnaldo, the man in charge on looking after a working camp of CODELCO, after hearing our tale, opened the door of one of the houses for us to open our sleeping bags. He also took us in his truck to get food, and on the way we picked up Seba and Clara who had already went to set up camp elsewhere.

Early the next morning, with the information that buses and trucks went by first thing towards Bolivia, we got up before sunrise to hitchhike on the route. And after a short while (like an hour and a half, but we a traffic of less than 10 vehicles) we were picked up by a plurinational family with a Bolivian dad, a Peruvian mom and Chilean kids. With them we crossed the border and made it to Uyuni, going through during the way: a power outage at the border, a car accident going off the road, and a motorbike accident.

Today we are in Sucre, the constitutional Capital of Bolivia, with almost a month in this beautiful country.

Thanks for reading, and until next time!