The Odyssey of travelling with rain through Bolivia

The adventure of travelling with no heading or dates always comes with unforeseen events: sleeping in the square, eating bread with jam for dinner, being invited to eat in a restaurant or by someone who saw you in need. And just until recently, we had avoided transport issues.

It was in Nuevo Mundo, that last town in Chuquisaca in our path from Sucre to Santa Cruz, were we found ourselves imprisoned by the circumstances and after a full day where only "La Flota", the long distance bus, circulated the road, we took the decision of paying it with no other option on sight. 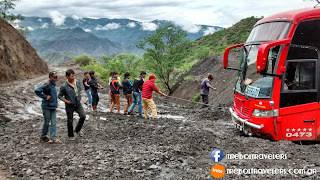 The Odyssey was travelling 80 kilometres in 10 hours; when already the normal duration is three hours. The main obstacle was the rain, which seemed to be falling by the bucket, foreseeing a hard day, and which for starters delayed the arrival of the "movilidad" (the transport). We climbed filled with confidence anyway. The first stop was just shy of an hour. It was obvious the driver knew the road because they stopped a prudent distance and went walking up to the hard curves. After a time while we were intrigued what they were doing, they came back to try to go ahead. The first complicated  turn was overcome without hesitation; the second one overcame us. And the order was: "everyone down, we have to push". So it was necessary to shovel, push and pull; and it took five tries to get out. There two buses, and both sunk, although the other one got out at the second push/pull. Since there was another hard spot ahead, we were sent walking a few hundred meters. And again it was necessary to dig, push, pull, although this second time it was easier to keep going.

It seemed we would go on well until, as we it been advised before, we arrived to a climb with a curve and counter curve, uphill, which was muddy and very wet, which made us stop the march. We were several hours stopped, waiting for the sun to do its job, airing and drying the road. After that there was shovel and hoe, to help the track, and give a try to the climb. There were two or three moments (per curve) in which we pushed and worked the road some more, until we reached the summit. From there it was known that the road was good, until we stopped  so that whoever wanted could eat, and others like us could buy a watermelon, until we crossed the bridge over the "Rio Grande" (the Big River). 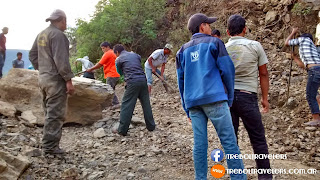 The end wasn't going to be so simple: a land slide laid a considerable rock in the road. There came out new tools, hammer and a crowbar, to reduce that stone. Also, in parallel, we had to level a little the stone-slide so the bus would fit between what was left of the rock and the mountain.


Summing up, having left at 9 in the morning from Nuevo Mundo, and having gone through 82 kilometres (55 miles), we arrived around 7:30 at night to Pucara. We don't want to give the impression that the service was bad (although maybe expensive considering the work done) since even in all those hours on the road we didn't see any vehicles that could have taken us.

This is just one of the many adventure tales of going around Bolivia.

Regards.
Don't forget to be happy, whether it rains, snow or hail.
Posted by Loberto at 12:18 AM