A new Member, a new Home!


While in Perú we moved close to the sea to counteract the 100 days in the Bolivian high-plateau, all the way to Nazca (or Nasca, both are accepted) where we found Edgardo, an excellent host of CouchSurfing who allowed us to settle and relax everything we needed and more!

While at it we planned going to Cusco (or Cuzco) to replenish our funds which where already running low. And it was then that the Universe showed us that our plans for the future are worthless... Walking a Friday afternoon through the streets of Nazca as we had done tens of times in the previous 10 days we ran across a VW Kombi with a "FOR SALE" sign.


As we had donde many times before, we sent a text message asking the price for sheer curiosity. And when the answer came, we thought the price was so low that we started dreaming. Later on we noticed that we had though the price in Bolivian pesos and not Peruvian soles (which doubles the price), but it was already too late: it was still a good number and the dream were flying high. 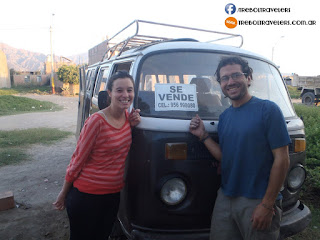 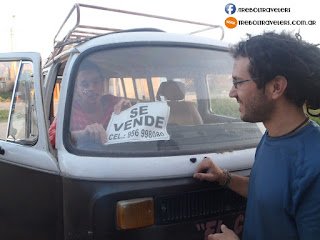 Taking advantage that at Edgar's house where an Argentinian couple traveling in Kombi, we went to see it on Saturday morning. The general consensus was that it was in great shape in the exterior, that the engine sounded fine, that the bottom was impeccable, that everything seemed to still be original. But it had to be taken to the mechanic, sine this are the only ones who tell the real truth (or so they say).

Sunday we built our heads up. We pictured ourselves traveling, living, being inside it. 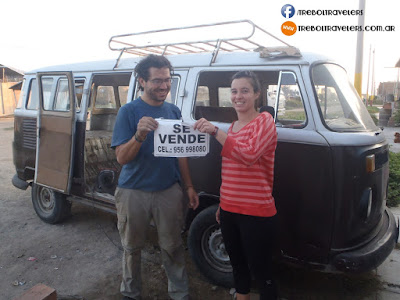 Monday morning we took her to the mechanic, they measured the air pressure of the cylinders (that today I've learned it doesn't imply anything) and nothing else. They were with a low compression, but which is fixable replacing the rings and that's that,and which adds a considerable amount to the final buying price... It was already too late for us, we had primmed ourselves a lot with buying it, we had been talking about having a small motor home for many days before, we had it at the reach of our hands. A we decided to buy it! 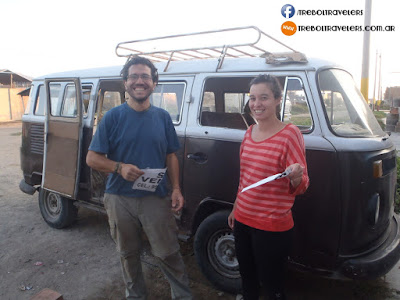 For bureaucratic issues a tourist who wants to sign a contract in Peru need an authorization, which is done in Migrations and costs S./ 16 (sixteen new soles). So Tuesday at noon I embarked on a quick trip to Lima with two objectives: getting the authorization stamped in my passport; and visiting a mechanic to organize doing the necessary fixes to the Combi. A RESOUNDING SUCCESS! It was a 36 hours trip, of which I slept 5 and was traveling, on the road or on truck another 20.


And so, on Thursday July 25th of 2015, a week after seeing her for the first time, Julia and I became owners of her, "El Causita", a brazilian combi of 1986 prepared for passenger transport, painted coffee coloured and with room for our home for many kilometers to come.

We are in Limanow, waiting for Rolly, the mechanic, to do the repairs we need to be able to live and travel on Her for many years to come.

See you on the road! Now with a new perspective!!!

Don't forget to be happy, since the Universe always conspired on our favor!