We celebrate Six months, on the 8th month travelling

And we made it to the sixth month!!!

And we actually passed them really, since we left on January the 16th and we are already over 8 months travelling. I can´t believe I am writing this and in two months almost nothing changed. The last 8 weeks in Lima kept us busy with everything implied with the buying of a Kombi for travelling, so it is still possible to write about the first 6 months without having the last ones modified much of the story. 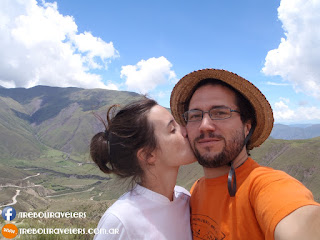 When we left Resistencia we had the intention of doing the whole trip hitch-hiking, and the idea of going back to Argentina so Julia could sit for her finals, in November or March.
Today things have changed and a little more defined. We have a Kombi which needs to be renewed, so we are sedentary until she can roll alone and we are not hitching any more, we learned that tying ourselves to hitch-hiking in Bolivia is a very hard thing to do and were obliged to pay for transport, and we are certain that we want to be by the end of October in Argentina.


And everything else is a mystery.


Lets do a summary of these 6 months, in a few words and lots of photos:


Part 1) The first stage were the 15 days in Argentina. We had though of going out quite fast towards Chile, but the opportunities took us to discover a side of Salta that had never occurred to us as an option before, and we went through a sector of the Route 40 that has an average of 5 cars per days (on our count); we successfully hitch-hiked in this place, and got a ride with a Brazilian family through the road less travelled, with whom we travelled several hundreds of kilometres until our first stop in Chile in San Pedro.

Part 2) The second stage consited in our short trip in the Chilean north. We stayed one week in San Pedro de Atacama, hosted without a host in his house, and another week more between a short escape to Iquique and some days in Calama (the ugliest city in Chile, as we had been told). In our exit from Chile we met Sebas and Clari, two travelers with who me built a friendship that accompanied us during our tour in Bolivia (and them some).

Part 3) The longest stage so far were the 100 days we were inside Bolivia, a few more days of the 3 months authorized, and much more of the month we had originally though of. We started going through everything very slow from Uyuyni up to Samaipata, visiting all the small town like Betanzos, Villa Serrano, La Higuera, and also the big cities like Potosi and Sucre, getting to know the altiplano, enjoying and suffering the singularities living conditions: the hight with its cold, the people that through history became distrustful of the "white man", the exquisite food that they can make (of the food we highlight the Peanut Soup, typical in almost the whole country and of exquisite taste). Starting from Samaipata we decided to pick up the pace, what in any case meant almost one more month inside the country until we crossed the border to the neighbouring Peru, since we still had to see the Titikaka, La Paz and all its surroundings.

Part 4) Entering Peru we had and urgent need to go back to sea level, to the zero meters, from where Julia and I are from, so after a stop in Arequipa (that prolonged itself more than expected by the kindness of our friEnd and hostess) we went on the search for a beach; and we found one especially nice with some fishermen who adopted us as their guests, inviting us their fish, their kitchen and their company. From there, after rejoining Clarita and Sebas, we went by the coast up to Nasca, where it all seemed we were going to stop the travelling a while to go look for a job in Cuzco, and where we ended up buying the Kombi that now has us so busy.

Part 5) This stage exists for the sole reason that by changing the way of travelling, everything changes. And when everything changes, the stage were we are at must change also. Because today we are waiting that the engine is installed in the Kombi, and that we finish setting up the interior of it, so as to go on travelling and keep knowing this beautiful continent and the wonderful people that inhabits it. This is the waiting stage. The sweet wait to see the Kombi reborn, and be able to see it first steps in going around the world.