After leaving the Causita in the ship of Eukor and saying goodbye of the great help of everyone from MHSA, came more than 20 days of waiting until being reunited with the Causita.

To get to the city of Bremerhaven, where the port where the Kombi would arrive is located, I decided to fly to Berlin and then hitchhike the rest of the way. This stretch would be one of my last chances of depending exclusively on my thumb; it was harder to get to the port than I had imagined, but I still made it fine. Since the arrival of the ship was delayed from its estimated date of Thursday March 3rd up to ext Friday, and it wasn't unloaded until Saturday, I was told I could pick up the Kombi only on Monday March the 7th.

When Monday morning came I had, as usual, a slow start; and only at 11 in the morning did I make it to port. The fact that I went to the old offices of the local agency and not the new ones, also helped me in losing a good hour. The biggest problem came up when I found out that I couldn't pay in US dollars. I knew I had to pay cash, but since all the estimates had been done in U$D I thought I could pay in this currency. I couldn't, and I was forced to go look for a currency exchange house, which wasn't easy. It was already noon and the banks were closed. After lunch, when they reopened, I was told in one that there was a limit of U$D 1000 to how much they could exchange per day, and I needed somewhat more than that. I solved it going to 3 different banks , always changing the maximum limit allowed, which was not the same in each bank. 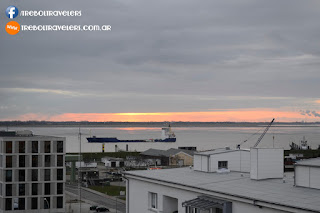 Before going back, and before I was able to look for Causita, I had to resolve the insurance issue. I had already been doing some research, and in Germany the only agence with which I could insure foreign cars for tourists (at least in my experience) is with the ADAC (The Car Club of Germany). there is a Dutch agency that insure cars for travelers and tourist, but they never answered my mails. The process of insuring Causita, between being a tourist car with Peruvian papers and it belonging to an Argentinean with Hungarian papers, was complicated required several phone calls, and over one hour. This I clearly did in and office and the calls where made by the guy working there, on the phone I wouldn't have been able to get a price even.

With the time of exchanging money and insuring the Kombi, I went back to the port around 5 P.M. Which ended up being a problem, because at 5 almost every office in the port closes. I was able to finish the paperwork with the agency and having the papers to pick up the Kombi. The problem was that I had not done the customs papers before, and this made it impossible to get out from port. After a short crisis cursing all the four winds and without knowing what to do, I decided to pick up the Kombi (at l least I could give Causita a kiss) and going alone to th customs agents and see if I coud do the paper work alone. After a long talk searching for their sympathy, I was led to the conclusion that I could not do it by my own means and that I would have to wait until the next morning to do it with the specialized agency. 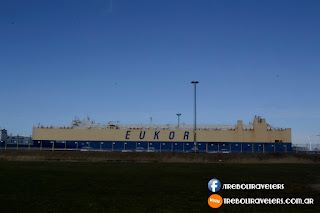 The positive thing s tat I came out of the offices with an excellent news: normally to get a vehicle inside Europe it is necessary to pay a deposit of roughly 30% of the value of the vehicle + the value of the shipping (19% taxes and 10% customs). In my case, having a 30 year old vehicle I could inscribe it as an "old timer" and so it was exempt of paying taxes and only had to pay a 7% for Customs; also, since my Kombi is valued in its purchase agreement in some S./2000 (two thousand Peruvian soles, approximately €550) that amount to pay would be low. This is summarized in that in stead of he almost €5000 I could have had to pay if the Kombi was valued at some of the prices found on the internet, I had to make a payment of some €155 to be able to temporary import my Kombi into Europe.

The next morning upon wakening I quickly went to the offices of the customs agents, delivered all the papes and explained my situation, and only an hour and a half later I was able to drive my preious Kombi in German soil.

Summary of the process:

1) with th shipping papers, go to the office of Wallenius Wilhelmsen and pay the remaining amount: cost of the shipping and port expenses = €1150
2) with the release papers, go to the customs agent HOLLCO and make all the paperwork, and pay the expenses = €150
3) with the release paper from Walleniuis, go to the deposit and retrieve the vehicle.
4) drive up to the exit of the port and go finish the paperwork in Customs: deliver the receipts from HOLLCO and pay the deposit (it can be done in cash or cards).
5) smile, be happy, and go discover the world. 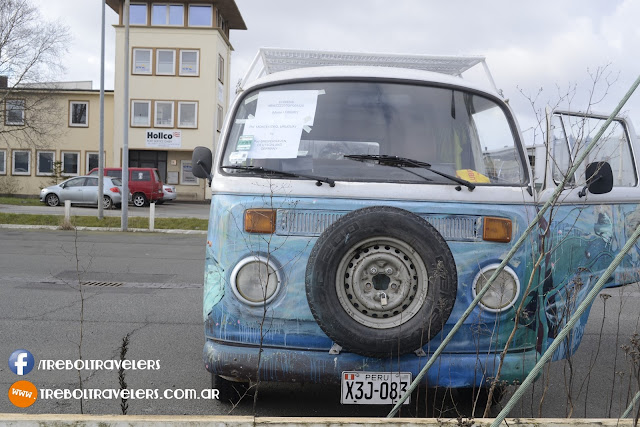 THANKS TO EVERYONE WHO HELPED ME TO ACHIEVE THIS!
Do not forget to be Happy.
And lets keep our eyes open, so we see each other around the World!!!