Sending Causita over to Europe 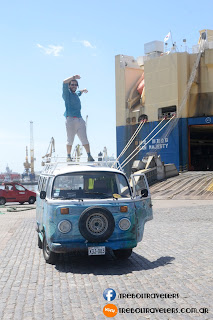 After lots of dreaming a lots de delirium about the idea of sending mi Kombi to Europe, it has become a reality. (Clarification: in South America we call them "Kombi" to all VW T1 & T2, also called around the world as: VW Bus, Bülli, VW Van or VW Camper Van).

The idea was born when my cousin M (I am going to start referring to people by their initials) told that she was getting married. I really wanted to go and be with her, but the Kombi could be an inconvenient. So I thought that if I got a sponsor to overcome the costos of shipping her, then I could get a prize ticket... and then with a minimum expense I would be gone to go around Europe on a Kombi. 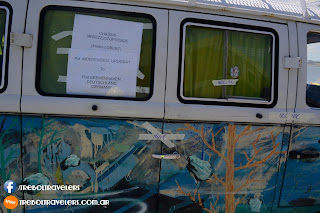 Already in Buenos Aires the idea of going to the wedding strengthen, and I got the sponsorship of F who gifted me the fare of Causita. So, on the last week of January, I started researching costos of the shipping from Argentina. After a short while I started looking for estimates also from Uruguay, to check if Montevideo offered better prices than Zarate (the RoRo port is in Zarate, not BsAs). And at the same timw I was requesting estimate, I added the question if any agency would be willing to sponsor Causita.
Eventually I got an answer from the Comercial Representative of the Agency Montevideo Harbour South America Ltd. (MHSA for short), located in Montevideo, Uruguay. From the first contact with him, let call him I, I already had a good reaction to the proposal. With time we were able to go deeper into it, I made a formal offer of sponsorship in exchange of promotion, and we got into an agreement. 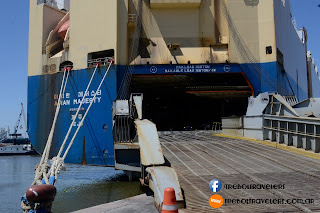 The next step was defining a departure date. My original idea was to embark Causita in March, but the ship from EUKOR (the shipping company with which MHSA works with) was not yet confirmed to any port in Europe; thinking about alternatives I asked about a ship an earlier, and I confirmed that the February ship was confirmed for Europe, and arrival date in MVD of Friday February 12th. So it was quickly decided that the embarking of Causita would be that weekend from the Port of Montevideo. Which gave me 10 days to finish the preparations, the furniture and the paperwork to ship her to Europe! The organized trip is a RoRo (Roll In, Roll Off), that is like a mega ferry for long distance where cars go in and out by driving them, with no container involved. 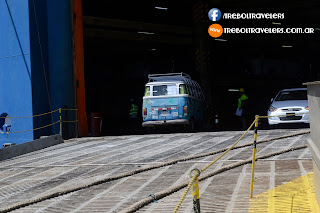 In Montevideo everything was perfectly smooth. When I arrived I went to MHSA's offices where S was waiting for me (I´s co-worker) with all the information, and we arranged that the best was doing the boarding on Sunday morning. We met that morning in the Port, he delivered the paper for exiting de vehicle in Customs and showed me the way to  the ship. A 15-story high Monster and the capacity for thousand of cars. We have to wait for a missing paper, so I took advantage of the situation to get some goodbye photos. And finally the assigned driver came (because even if it looks like a giant ferry, only authorized personal can drive in and out). He got her up, parked her, it was secured, and I have to say goodbye.


It was a super emotional time for me, by what it implied to split for the first time from my house, my home, my next travel partner.
And today is the day of going to look for her, of reuniting with her.
Y hoy es el día de buscarla, re reunirme con ella. Más tarde les paso novedades!

Greeting around the World, and look for me on te roads!!
Don't forget to be Happy.
Martin